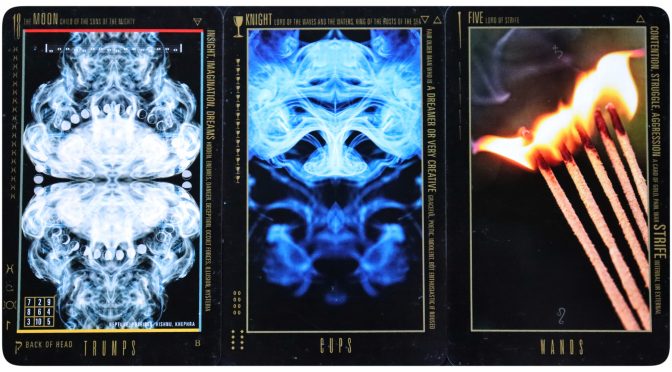 The sun may be out but it’s far too easy to let one’s thoughts run in dark alleys. Some may fancy themselves to be enlightened thinkers, someone who is above the brutality and violence that others refuse to remove themselves from. But not all acts of cruelty require an armored fist. One of the easiest ways to be cruel is to think of oneself as beyond cruelty, and by doing so, explain away the refusal to be compassionate as the mark of a deep thinker. Let them be an example to avoid.

Bryan Lahr’s Wyzard of Odd tarot deck is constructed with images of literally smoke and mirrors, and has the margins lined with correspondences from other religious and esoteric practices. The slightly oversize deck is also good for single card contemplation as the images fold onto themselves and the viewer.