First, let me explain the Dollar Tree. The Dollar Tree is a DEEP discount store that sells everything for a dollar regardless of quality. As in there is no quality. As in if you want some semblance of quality you go to Wal-Mart. For the frugal shopper, there are many items worth getting at these type of stores.

The Dollar Tree Tarot is a deck of 78 cards made for the Dollar Tree store. The box labels itself as a tarot deck, and proudly announces there are 78 cards in the box. What the box does not tell you, is 8 of the minor arcana cards were not printed to make room for 8 instruction cards, and not only was an Ace of each suit printed, but a One as well! I purchased this deck knowing in advance there would be some shenanigans with the deck. It was never a serious purchase. There was more giggling involved than a gaggle of teens on a sugar rush.

If you were to scream “Deceptive Advertising”, you would be wrong. The box said there were 78 cards in the box, and 78 cards are in the box. There is no international trade standard for what comprises a tarot deck. You could have 15 slips of unmarked notebook paper in an envelope with the word “tarot” scrawled in fingerpaint, and legally sell that as a tarot deck. (If you were creative with your marketing, you could sell that very well.)

The majors of the Dollar Tree tarot is complete, so I pulled those out separately and began using it as my “joke” deck for those times people just wanted to be silly and have a laugh. I found the “joke” deck, while having a sarcastic and “no fucks” voice, was just as accurate and impaling as my more serious (and proper) tarot decks. 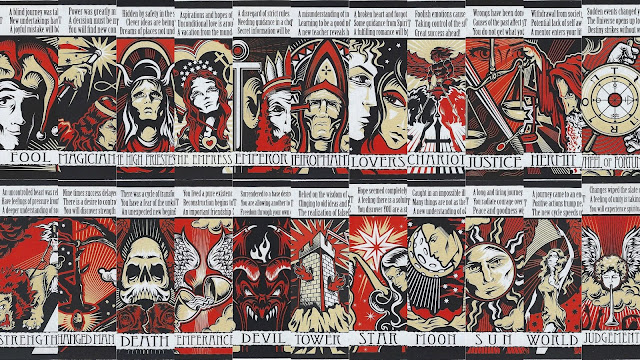 As is common with branded items from the Dollar Tree, once it is sold out, there are no guarantees it will return. The Dollar Tree tarot was last seen on the store shelves in March of 2013, and has not been seen since. It is amusing to find it offered as a collector’s item on eBay for $50. Other complete printings have been spotted in general stores and toy stores as part of a “children’s” play set, but I’m content with this cereal box cardboard, flaking ink, misspelled and misprinted deck.

Buy me a coffee if you have enjoyed this post or purchase a personal and private reading for yourself!